May 27, 2016
On this fine Friday we started off with house visits to deliver much needed food to various families associated with the Rift Valley Fellowship. Our 12 person crew was split into 4 groups and each was accompanied with RVF staff members to show the way. Each of the groups was handed bags filled with smaller bags of cornmeal, sugar, and rice for these families in need, and were to visit 2-8 houses. We set off walking not quite sure what to expect, but I am sure everyone who went can now talk about how their life has been changed this day.

There were many things my group witnesses and like the rest of our crew we will never be quite the same. I could tell you about Peter and his three children, whose wife past away this week, or the single mother who left her nine children alone in a bathroom-size house all day in search of food, but instead I will share about the unanticipated visit our group made today. Our guide Maggie took us to a house that she lived nearby that she said desperately needed our help. We arrived to find a small house with three small children in a bare room. In the center of said room was an open flame that was polluting the air that they were breathing, it did not help that they were sitting dangerously close to the fire and boiling pot, with their feet literally a breath from the scalding embers. Our group did not have any food left to offer, because we had not known anything of the condition of this family when we set out, so we offered the best we had by praying with them. As we were praying it was hard to ignore one of the boys who had what appeared to be a large burn on his forehead that we were told was from an accident. He was hobbling practically into the flames as he picked up what appeared to be rocks and sticks from the ground, putting them in his mouth to eat, then spitting some out in disappointment, though swallowing others. As we were leaving our group leader Isaac told us that we were going to come back with food, and it was going to be today!

Sure enough, we were back in less than an hour with three whole bags of food for them. Their gratefulness could not be expressed in words, and the same could be said for how such need has moved the hearts in our group. How are we supposed to walk away from this? While I am sitting in my comfortable home with more than enough food there will be a house in Africa with three small children tottering dangerously close to a boiling pot, throats burning from fumes, waiting for their mom to return, hoping for food, never truly understanding their situation, but living it every day. The hardest part is they are REAL! So very real, seen with my own eyes and it is something that must never be forgotten.

The home visits that we made today will leave a strong image in my mind of the experiences of grace found in an area of such poverty. As we visited single mothers with over 10 children living in a small home, or a family that can not find an income to feed their family, I was struck with an overwhelming sense of helplessness for these families that we were now face to face with. It was impossible to ignore the children in the streets, alone, playing in the dirty water while they should be in school, or eating things that they found on the streets. It particularly bothered me seeing a little boy under the age of 2, sucking on a plastic bag and wondering around while we talked to his grandmother. I am so thankful that the Rift Valley Fellowship had enough food so that we could hand it out to some of those that need it. It breaks my heart seeing how these people are struggling this much to find a way to provide the basic necessities of life. Now that we’ve heard these stories, we can not say that we don’t know what is going on. We are responsible for this information and can no longer be ignorant. As we continue to pray for the work that the RVF is doing, Isaac and Esther are continuing to be active in this situation and are examples to all of us.

We ended our day with a trip to the Maai Mahiu primary school where we were able to talk with the 7th and 8th graders about life in America. The classroom was of average size, with approximately 18 two person desks, each filled with 5 or 6 children while more lined the wall in the back. Though the situation in the classroom was not the best, we were very encouraged by all of the motivation and ambition that was very evident in these children as we talked to them. From surgeons, to lawyers, to mechanical engineers, to pilots, there were no small dreams in this classroom. Regardless of their situations, they were grateful for the opportunity to attend school and had big plans for their future. What more could you ask from these brave and hopeful children. 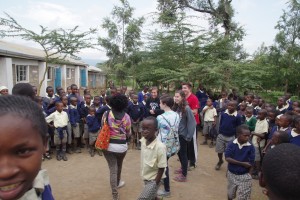